An Insight into the World of App Development

Following on from Shiphar’s recent blog on webinars, we continue with the theme of working remotely; this time within the context of developing a mobile app for farmers. Chris reflects on his journey so far of working with FIPS on this ambitious app - all while working on three different continents!

“FIPS are a non-profit organisation who work to assist farmers with increasing the productivity of their crops and livestock in a sustainable way. During a meeting with them back in September 2017, Stats4SD’s Ric found himself talking about data loops and what that might look like in practice for them. This conversation not only rapidly developed into a strong concept note, but also an ambitious work schedule to challenge our ability to turn vision into reality. A few short email exchanges later and the challenge was firmly set: we wanted to make an app that could start initial testing in just a week’s time with the aim for wider roll-out as early as December 2017. Needless to say, I got to work immediately!

The main research question centred around the use of a product called GroPlus, which aims to actively encourage farmers to observe their own plots and to notice growth differences (to become the researcher!).

Farmers in the trial would be planting a variety of different crops in soils of different quality, and commenting on whether they thought that the use of GroPlus made any difference to early growth stages.

My role was to work alongside the excellent data-manager at FIPS, Stephen, and to design an easy-to-use app that would allow local advisors to collect information from farmers and feed back results. We were hoping to run a very quick cycle of development and testing; essentially alternating between one week of development and one week in the field, with a working app version that could start roll-out in just one month!

As with most development work, it is incredibly hard to gauge just how long things will take. We’re fortunate enough now that we have been making a number of apps for similar purposes over the years, and have a nice set of templates to draw from. However, the ever-changing nature of technology and specific project requirements means that there will nearly always be something new. Fortunately, Stephen provided very detailed specifications of not only what he thought would be useful to the farmers they work with, but also gave thoughtful consideration into what best to prioritise first, and how to go about testing.

The first days working on the project were mostly spent under the surface; setting up database structures and creating a secure login system that could be used to register data collectors and farmers; provide offline access to data and allow for efficient syncing when Internet is available. From there we proceeded to build-in survey questions and the first early visualisations to help us track app usage and feed back initial results.  A final coat of polish was given before sending into the field for testing - all just one week after progress started.

Feedback from the field came thick and fast (every developer’s delight!) and varied from minor issues and bug fixes to improved core concepts and future aspirations. All information was collated, prioritised, and then the next week of development started.

A large focus for the second week of development was to make it easier for individual collectors to swap between access to just the information related to their farmers and the wider network. We often talk about the idea of ‘little big data’, which might be considered to be using typical ‘big-data’ techniques and strategies on a small scale. Database structures were carefully constructed so that interactions could appear simple on an individual level whilst building a much larger picture on a network-level. Whilst such approaches might seem a bit heavy-handed at first, they are crucial to allowing for a system that might scale. The team at FIPS were more than familiar with such needs, and helped to provide structures that could help potentially scale across their existing system structure and to thousands of farmers.

Since the second round of development in mid-November, more feedback has come in and the database has started growing nicely. Unfortunately (as is often the case), other pressing deadlines and a week of holiday have postponed the third week of development (likely until the start of 2018), however I’m very excited at the progress that has been made so far, and look forward to sharing how this project grows in the future!”

And so, the journey continues! Wow, what an intense few weeks of developing and testing the GroPlus app. We thank Chris and the team at FIPS for providing us with an incredible insight into what it’s really like to develop such an app in its preliminary stages. If you have any comments on this process, or on the general theme of working remotely, we’d love to hear from you! Please post your comments in the box below. 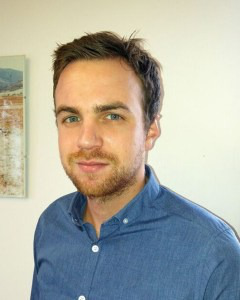 Chris Clarke is a Technology and Innovation consultant, specialising in cloud-computing and mobile app development,. His main interests lie within data loops & systems that both collect and feedback information for development. He is co-founder of UK-based charity Supporting African Maths Initiatives.

0 comments for "An Insight into the World of App Development":